The Daddy of Handwashing 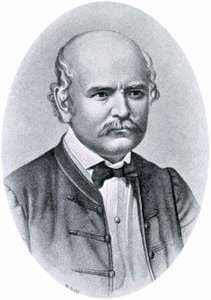 Okay, you’ve seen the loo roll wars, and now know what panic looks like, but imagine going into hospital and knowing that you had roughly a 13% chance of surviving if you turned left, not right?

That puts the loo roll wars into perspective doesn’t it?

But that is precisely what pregnant women faced in 19th century Vienna.

In 1847, a chap named Ignaz Semmelweis was an obstetrician working in Vienna, looking after two separate maternity wards, and he noticed – as you would – that the women in one ward died in droves, while in the other, the majority survived.

How could that be? He wondered and investigated, to find that in one ward, the women in labour were looked after by midwives, while in the other one – just across the corridor – they were in the care of (male) doctors.

Now, at that point, the medical profession assumed the people died from “miasmas” which were poisonous, invisible, airborne gases. But Professor Semmelweiss thought that this couldn’t be the case, because air moves, and would certainly blow from room to room.

Then he then noted the difference in staff: midwives in one room, and, in the other, doctors, who were also performing post mortems and autopsies. (If not at the same time…)

Obviously, the women were not allowed anywhere near the autopsy room, whereas the doctors would go straight from performing an autopsy to assist a woman in labour. Yep. Really.

You can see where this went, can’t you?

Yes. The doctors (like many modern visitors to the men’s room) were not washing their hands!

The Midwives never went into the post-mortem room and never handled dead bodies, while doctors would perform an autopsy and then go straight to the maternity ward next door to deliver a baby. Nice.

Anyhow, clever old Semmelweiss assumed there was a correlation between this, which was confirmed when one of his colleagues got septicaemia: Dr Kolletschka cut himself while doing an autopsy, developed blood poisoning, and died.

When he attended his chum’s autopsy (as you do?) Dr Semmelweis noticed that lesions on his colleague’s body matched the lesions on the body of the autopsy patient. This – he thought – meant that the SCALPEL had transferred the miasma, not the air!

Scrupulous and vigorous hand-washing was instigated at his command, and the death rate on both wards subsequently dropped dramatically.

Which was great for all concerned, except poor old Semmelweiss.

Because, you’d have thought that the medical profession would have lauded him as a hero, but no.

When he presented his findings, even though he could show that a simple hygiene measure – hand washing – was saving the lives of neonates and their mothers, he was utterly mocked and ridiculed.

It took many years and many more deaths before the medical profession got to grips with this. Which is one reason why surgeons wear bow ties – they can’t drip into things they shouldn’t (and I don’t mean their soup!)

Semmelweiss was sacked and ended his life in an asylum. Poor chap. Because, he was a hygiene hero.

How do I know all this? I heard a play on the radio many years ago and was horrified by this tale. So, I then went and read all about him. Recently the Google doodle was commemorating him quite rightly, as we all know about hand washing now, so credit where it’s due.

So wash your hands scrupulously and frequently, but if all that hand washing is taking its toll, you know where you can get hand cream don’t you?

That’s right. Text the Pamper line and I’ll post you some. 07961224560 will do the trick. You can sanitise the screen afterwards.

Stay well and have a radiant day!

PrevPreviousFive a Day?
NextWhy you can’t you use Essential oil in the waterNext

Plus Three Things That will Change Your skin for Good booklet?

Click >>>HERE<<< and you’ll be taken to a sign up page, where you just pop your details in the relevant boxes.

Remember, you’ll also get a bonus: Three Things That will Change Your Skin for Good booklet.

The Radiant Skin Course will pop in your inbox daily.

You may also get special offers, skincare tips, musings and treatment availability.

I might even try to sell you things, occasionally…

How to get in touch